Should you focus on perfecting your H1s and H2s, or should structured data demand all your on-page attention? While Google hasn’t completely pulled the rug out from under us, don’t let the lack of drastic change in page markup fool you. We will help you outlining where to focus your efforts when it comes to on-page SEO and offers some tools to help with the process.

In this article we going to about page markup and tags and which ones still matter for SEO. 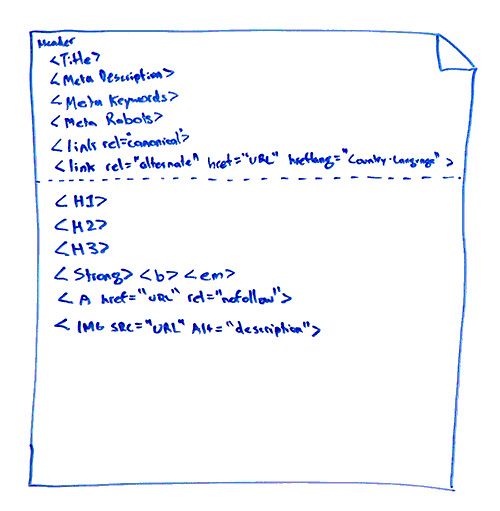 Old-school SEO best practices were sort of like, okay, I had to worry about my title, my meta description and keywords tag — keywords a little less though, keywords haven’t been worried about for maybe 15 years now — my robots tag certainly, especially if I was controlling bot behavior, rel=canonical and the rel=alternate tag for things like hreflang, which came about six or seven years ago, and my headline tags. Some potential basically markup or text tags that could change the format of text, like strong and bold and EM, these have gotten less important. I’ll talk about that in a sec. Obviously, with URLs worrying about rel=nofollow and other forms of the rel tag, and then image source having the alt attribute.

This was kind of the basic, bare-bones fundamental minimums. There were other tags that some people employed and obviously other tags that Google added and took away over time or that they paid attention to a little bit and then didn’t. But generally speaking, this was the case. 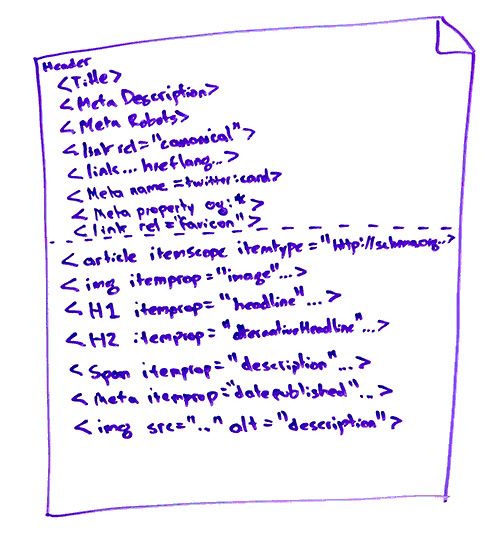 Nowadays there are a few more, but they’re really centered around just a few small items. We do have metadata now. I’m going to call this SEO even though technically it is not just for the search engines. Those are Open Graph, Twitter Cards, and the favicon. I’ll talk about that in a sec why that actually changed even though favicon has been around for a long time. Then, things like the markup for Google itself, the structured data markup that’s part of schema.org that Google is employing.

I want to be clear. Google is not using every form of schema. If you go to schema.org, you can find schema markup for virtually anything. Google only uses a small portion of that. While certain websites have seen an uptick in traffic or in prominence or in their visibility and display in the search engine results, it is not a guaranteed rank booster. Google says they don’t typically use it to boost rankings, but they can use it to better understand content, which in my opinion, better understanding content is something that often leads to better rankings and visibility, so you should be doing it. As a result, many of these old-school tags still apply of course — alt attributes and in the header tag the title and the meta description, meta robots, canonical.

Really what’s changed, the big things that have changed, added to the header of pages, I would tell you generally speaking that you should think and worry about:

Twitter Cards is pretty obvious. Basically, because Twitter is such a big distribution network for content and can be, it pays to have your cards optimized rather than to just have the URL exist on its own. You can stand out better in Twitter that way.

Open Graph markup, this is basically used by Facebook, an even bigger distribution platform than Twitter, and so of course you want to be able to optimize how you appear in those. Because social media in general is so well correlated with all sorts of positive SEO things, you want to put your best foot forward there. Therefore, I’m going to say this is an SEO best practice as well as a social media marketing one.

Favicon is a little weirder. Favicon’s been around for forever. It’s the little graphic that appears in your browser window or at the top of the browser tab. The reason that it matters is because so many sites — social media platforms and many distribution sites, places like Pocket, places that scrape, places that will show your stuff including sometimes, at least in the past, Google’s knowledge cards — will sometimes use that favicon in their display of your site. For that reason, it certainly can pay to have a good favicon that stands out, that’s obvious and clear, much more so than it was, say, a decade ago.

I know what you’re going to say. You’re looking around like, “Wait a minute. I still see a lot of recommendations from tools, even like Moz Pro, that say I should use H1, H2, H3.” It is a best practice. I’d say H1 and H2 are best practices, but they are not going to transform or massively help your rankings. They’re not very well correlated with better rankings. In lots of testing, folks could barely ever observe a true, reconcilable difference between using the headline tag and just having those headlines be big and bold at the top of the page. However, I’m saying this alone. If you are using itemprop to describe a headline, an alternate headline, in your schema.org markup, that actually can be more useful. We do think that Google is at least using that, as they say, to better understand your content. I think that’s a positive thing. Then, there are lots of other sites that can use schema as well. Google is not the only place. That can certainly help your visibility too.

It just kind of doesn’t matter as much. With CSS taking things over, you don’t need to worry about visual display of text in your HTML code nearly as much and certainly not from the search engine perspective.

I’m adding to the body tag of course all of the schema.org options. I’m just showing the article ones here, but you should consider any of the ones you’ve got — recipes or news or videos or all sorts of stuff.

Want to check your pages?

If you want to check these pages, you want to go through a process of actually reviewing all this stuff, there are a few tools that will do all of this stuff for you. They’ll look at all of these different tags and markup options.

The free one I love the most happens to be a Moz tool. I just really like it.

If you want to use a paid service to go crawl your site automatically and surface all these issues for you:

With these options, I would love to actually hear from you in the comments if you have seen markup or tag options that are not covered here that you think are influencing SEO for a wide range of folks. Please bring them up. Let’s talk about them. Let’s talk about any of these you disagree with.

What is Page rank and how it is different from Alexa...